A creative human response to the limitations of public-school development 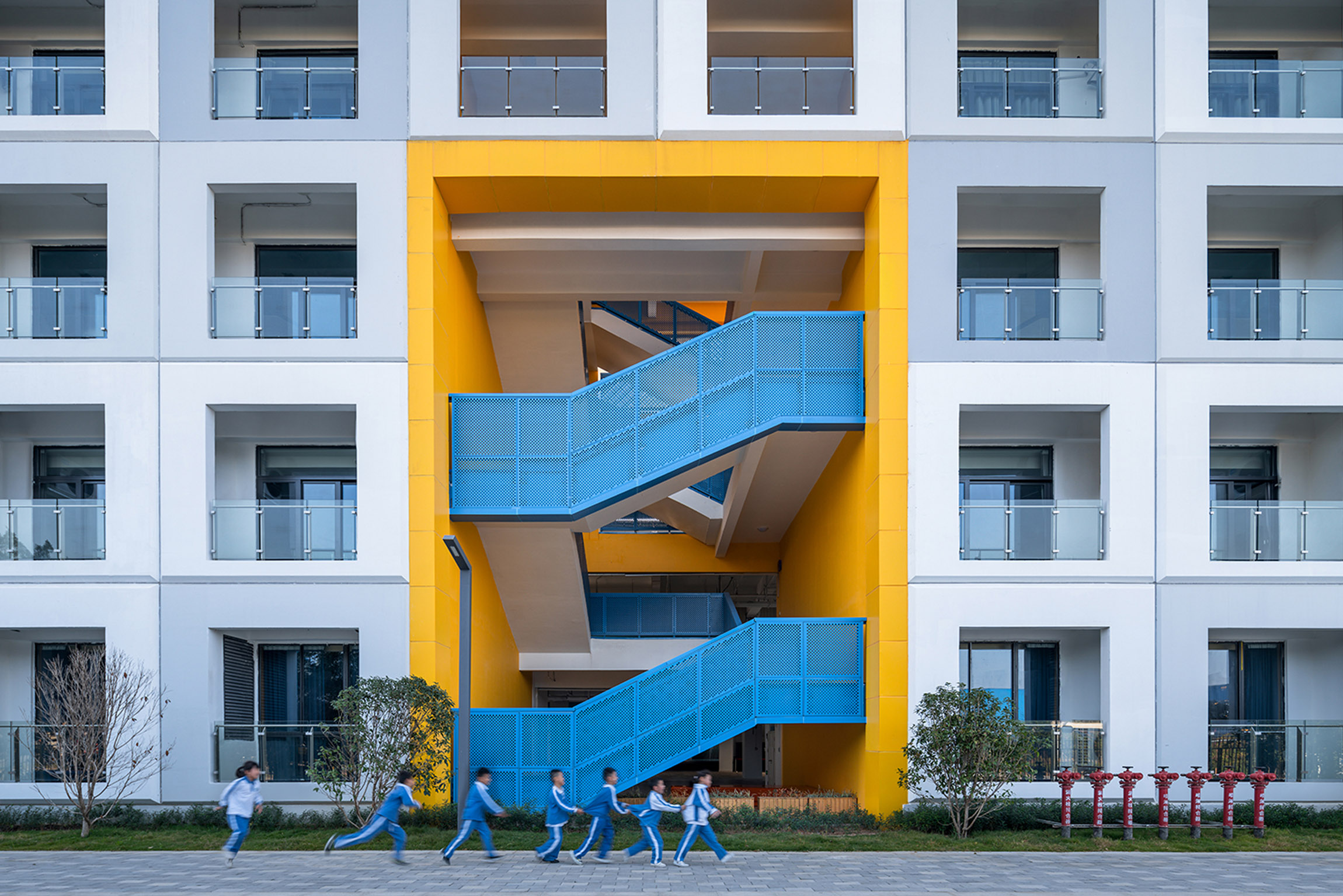 Crossboundaries designed a space that provides a solution to a realistic problem we are facing in quickly expanding cities in the future. 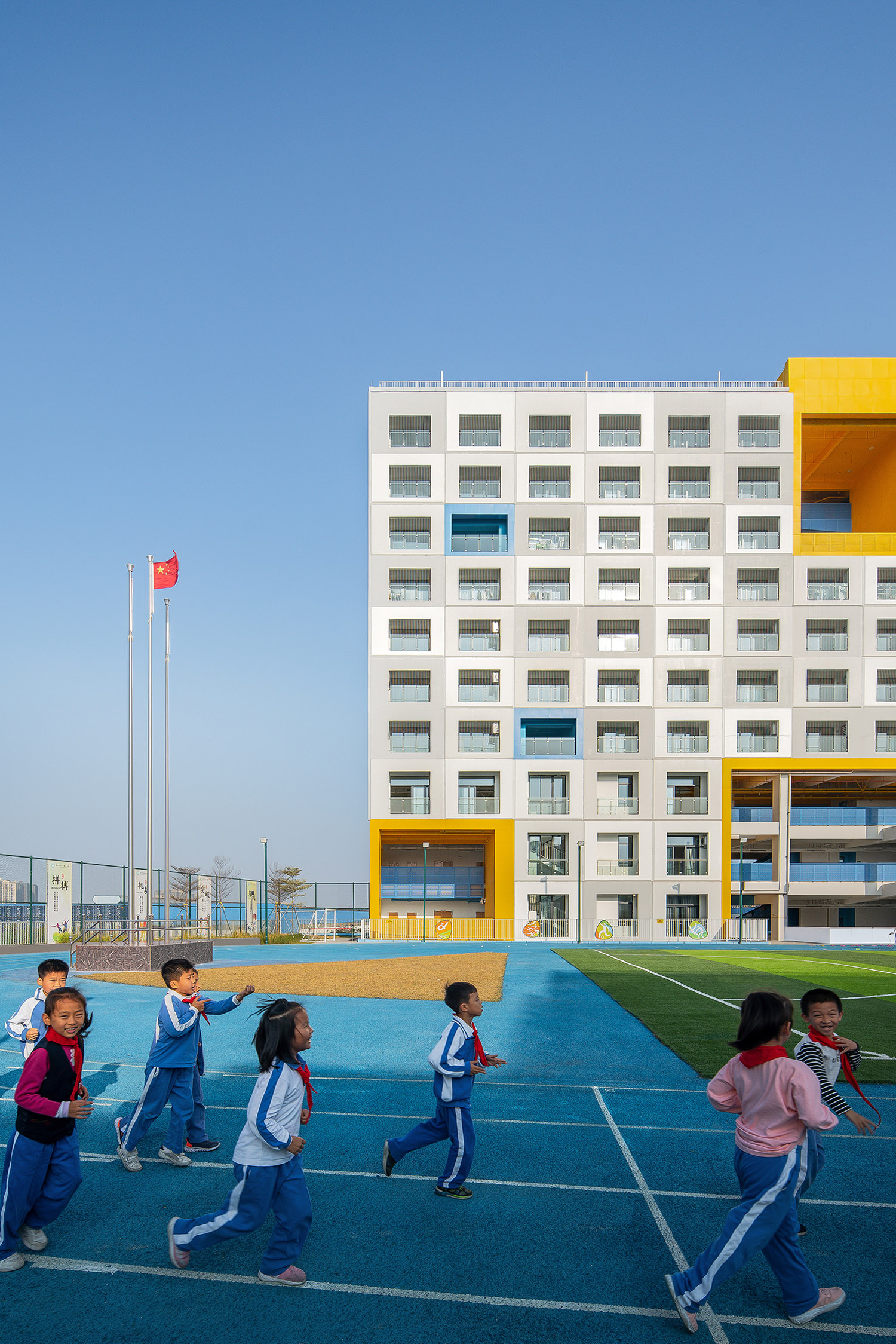 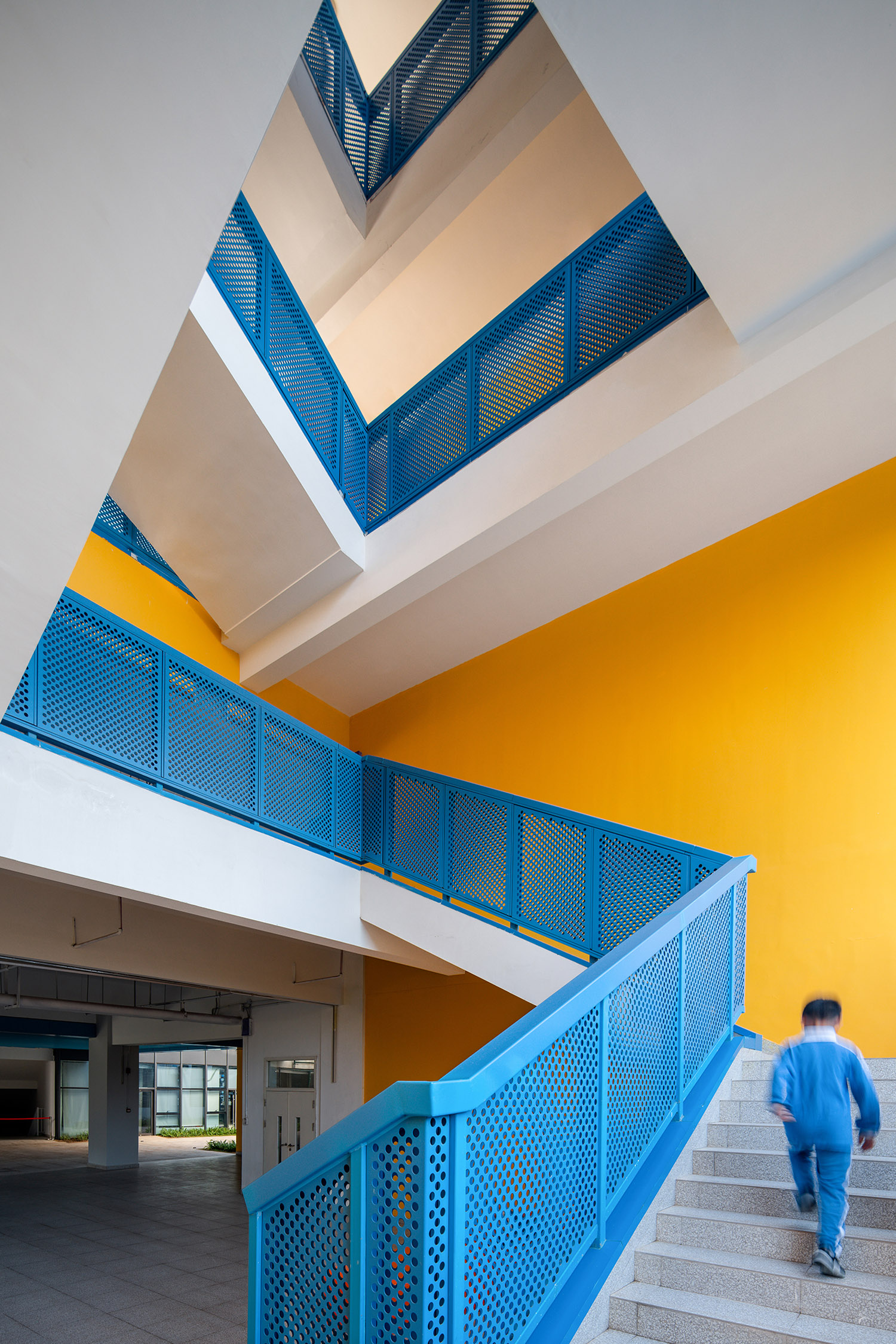 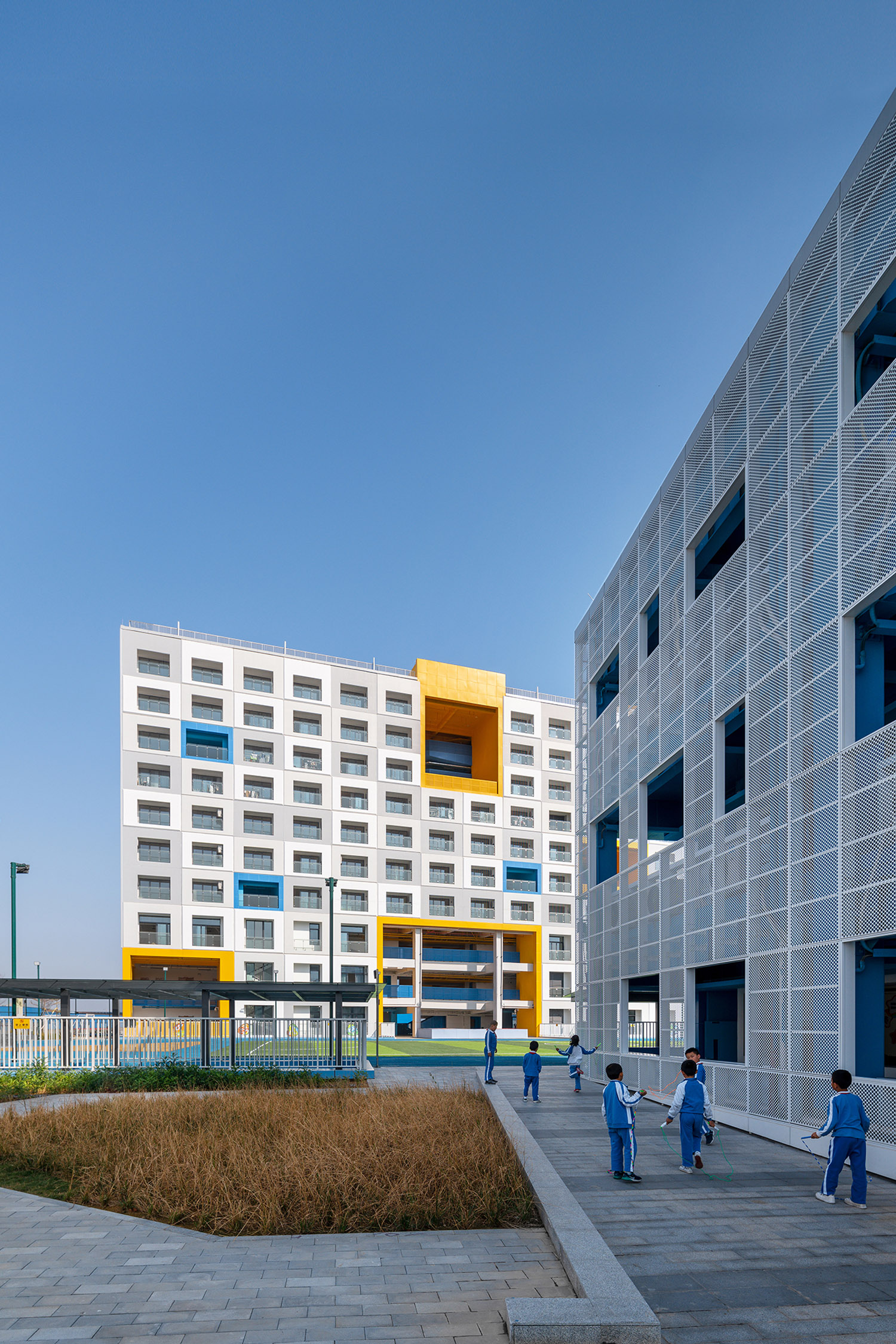 As one of China’s first-tier cities and hi-tech capitals, Shenzhen is facing due to its rapid population expansion an overall public-school shortage. Pingshan District (established in 2017) was predicting for autumn 2018 highly exceeding student enrollment numbers, which led the government to approve rather quickly several Prefab school projects to be completed within about a year of construction.

Crossboundaries, having already made a name for itself with other school architecture projects in China, developed as of June 2018 the 36-classroom Jinlong School & Campus, seeing it as another opportunity to contribute to a project of significant social impact.

Crossboundaries’ challenge was also very intriguing: to be as creative as possible, within a manifold of limitations in budget & timing, a very small site area of roughly 16,000m2, the mandatory use as many prefab components and metal composite elements as possible – and at the same time to integrate all the necessary functions for this school campus.

Crossboundaries choose an approach with the ultimate aim to create a human, people-oriented school, and to design a space that provides a solution to a realistic problem that one has to face in quickly expanding cities in the future. 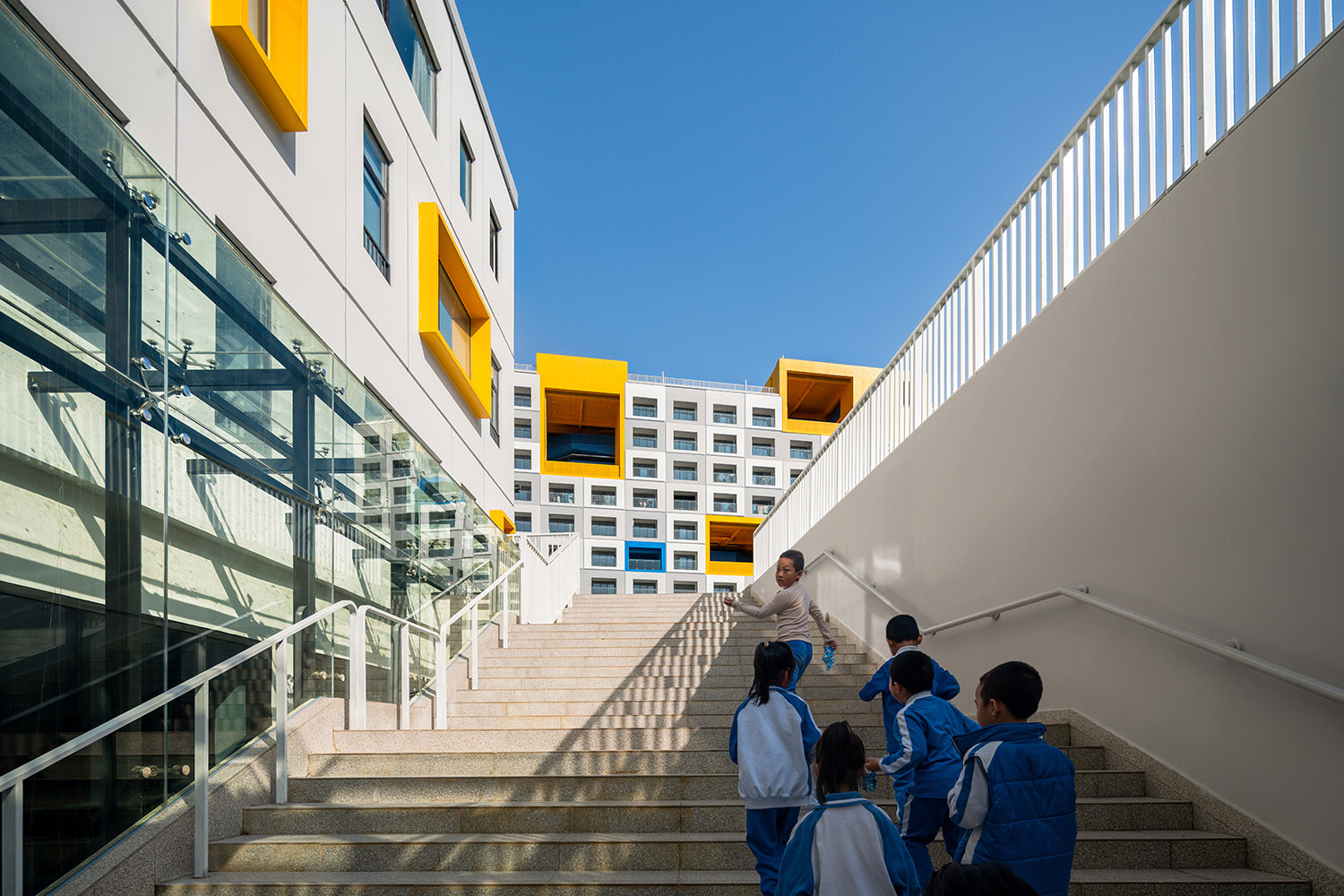 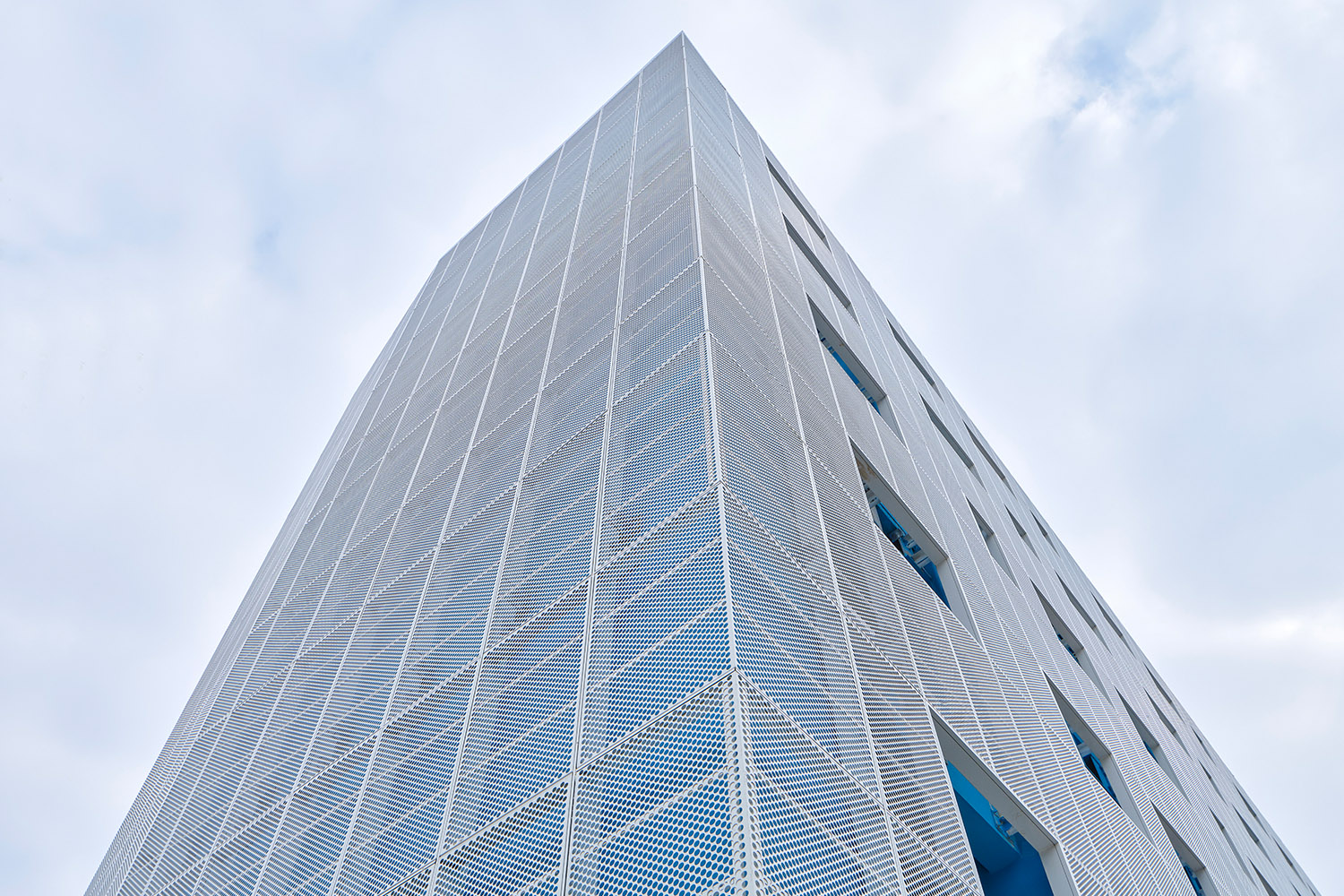 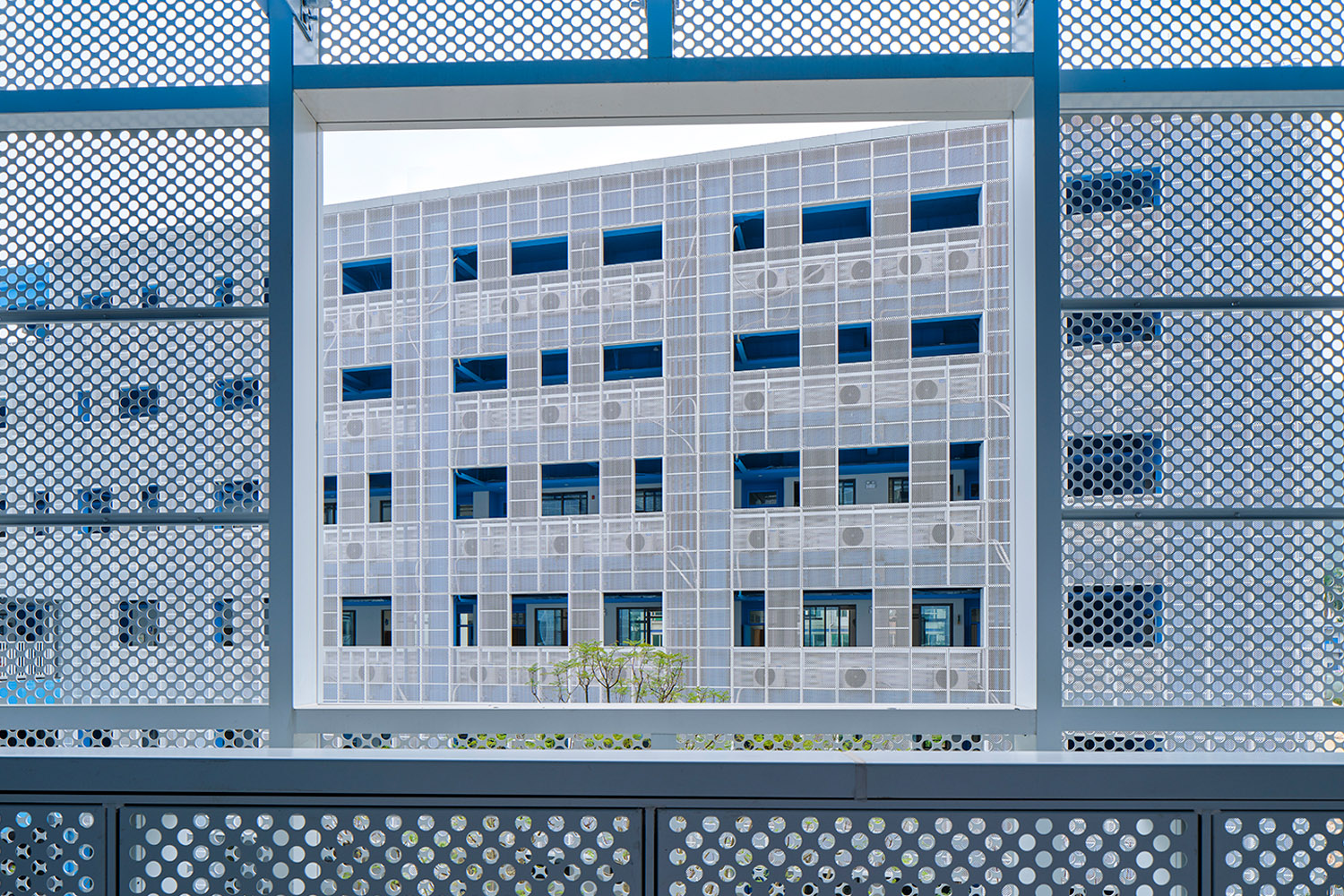 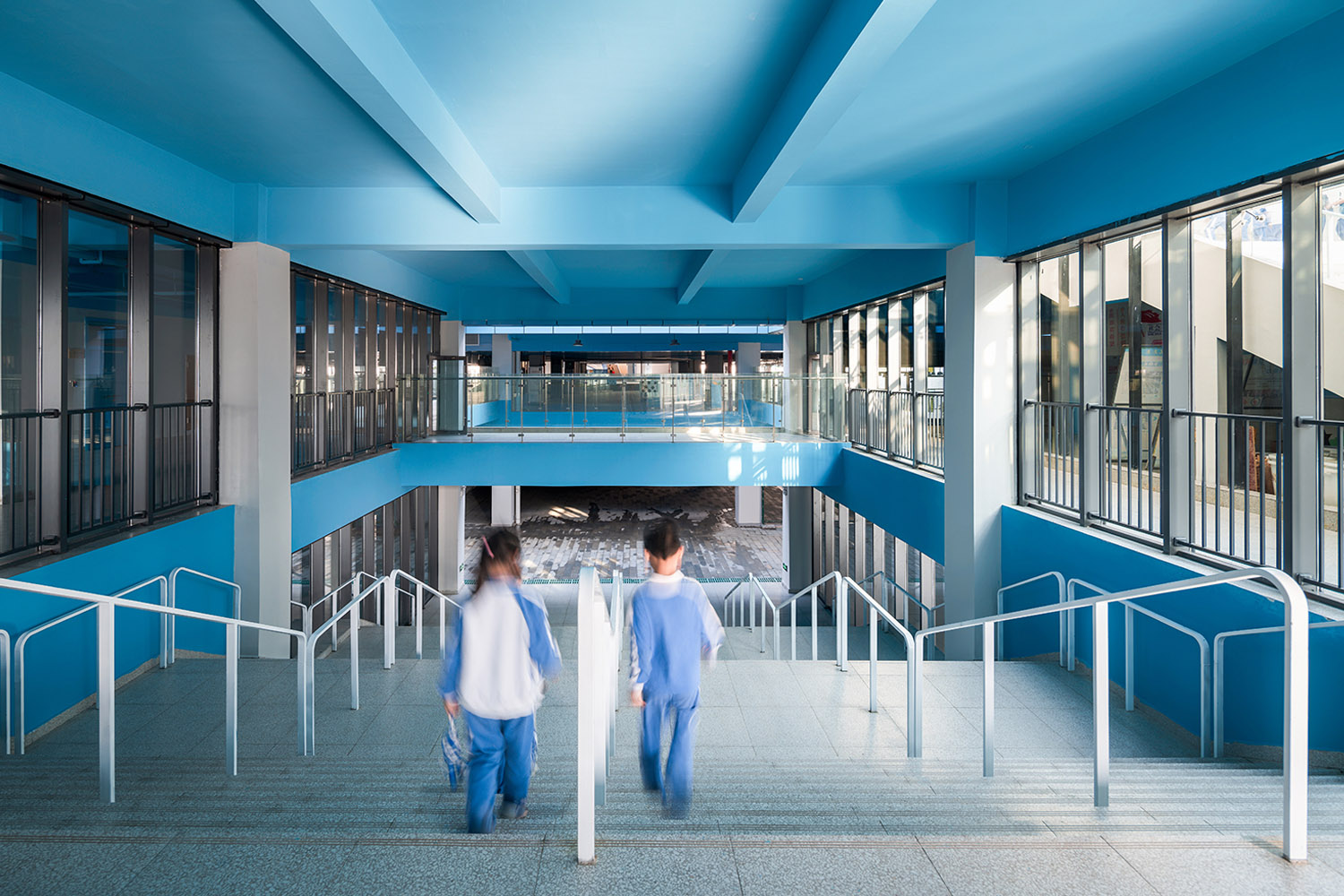 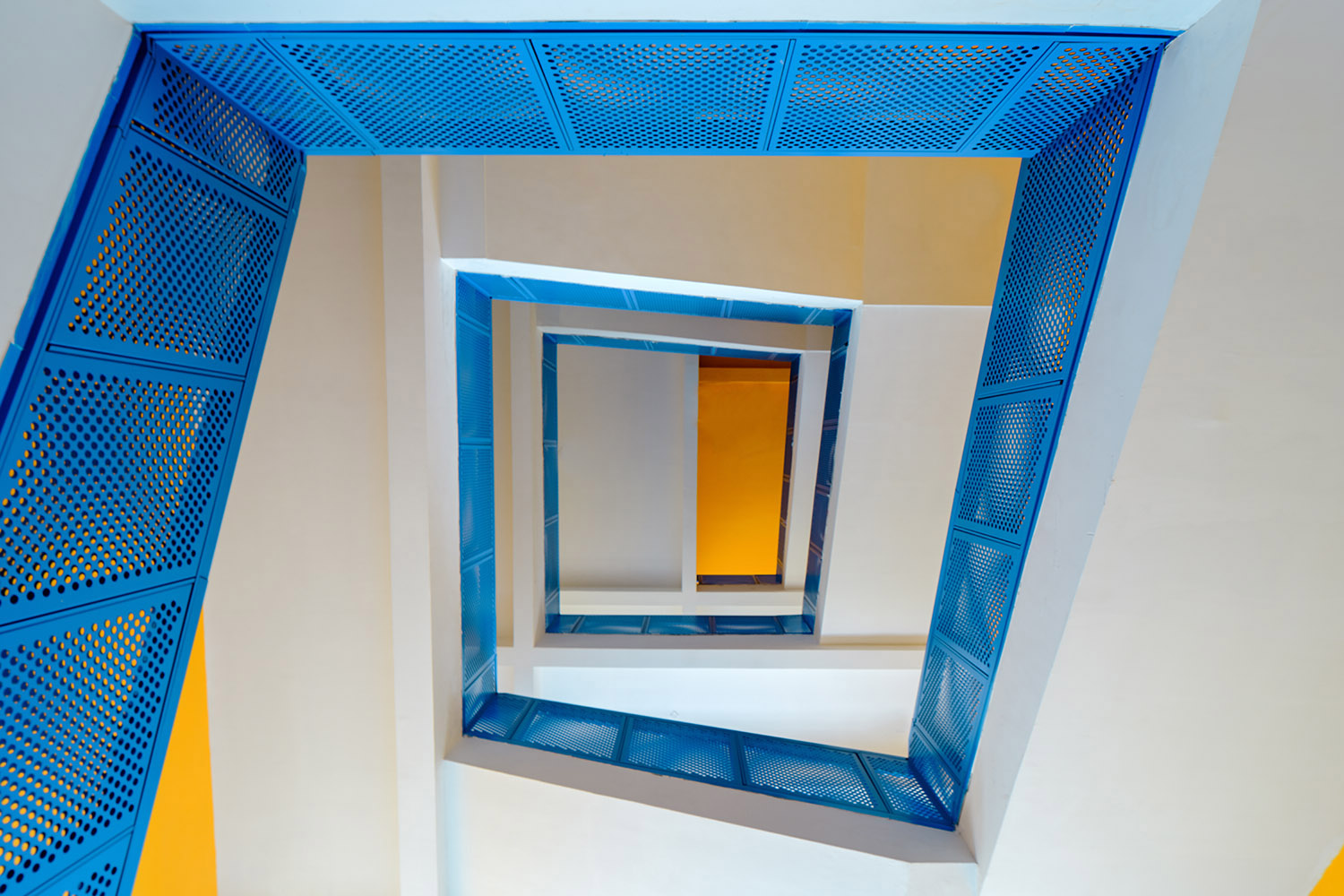 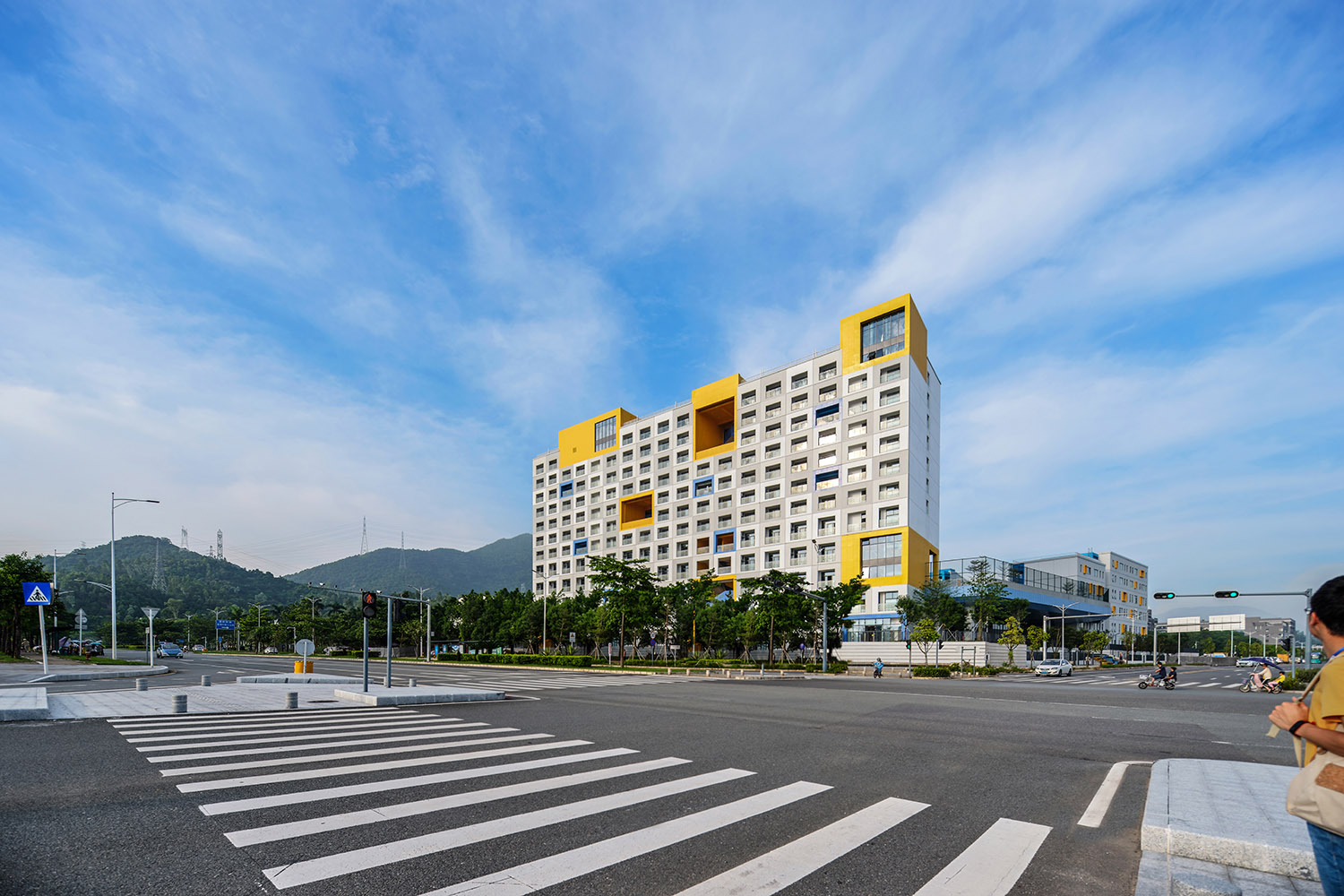 For about 75% of the Jinlong School Project, Crossboundaries adopted prefabricated structures. This dramatically reduced on-site construction waste, required wet construction, labor input and the necessary construction period. Due to the use of a local, Shenzhen based prefab elements factory, transportation costs were kept to a minimum.

Modular applications are mainly used in the residential and educational buildings (e.g. dormitories, teaching and other classrooms) whereas public spaces and some other areas are configured in more conventional construction methods.

The architects managed to give the school a distinctive aesthetic quality, its very own individual design character, whilst also paying attention to people-oriented spatial relationships. They aimed to break the rigid repetition of the same paneling, and to incorporate visually appealing highlights across the campus.

Six kinds of prefab panels were used on the three teaching buildings, with different width and different arrangements of window openings, thus creating of variations in an overall unified façade. Windows appear in an alternating rhythm in sizes, vertical and horizontal rectangular shapes, which also results in a change in density on the façades. Additional accents are set with yellow, protruding metal frames around selected window openings.

The color concept further defines circulation areas (paths and corridors) in blue and meeting hubs for children/students (e.g. in the dormitory) in yellow. Yellow is therefore indicating zones where people stay and socialize, and move less.

For the dormitory building – highly visible from afar – the façade is composed out of prefab panels in different thicknesses and different color hues. The most protruding ones are the brightest, the most set back ones the darkest. Evenly distributed openings function as balconies with a setback façade for the dormitory rooms behind them and allow for more depth in the overall appearance of the surface.

Clever Interventions in a high-density space

With a construction area of more than 50,000m2 and a site area of only around 16,000m2, the plot ratio of the Jinlong project is almost 2.5, representing a quite high index for a school. It was essential to design the public spaces following practical and at the same time smart considerations, trying to avoid repetitiveness and a sense of oppression as well as to set aside space for future educational innovation.

Whereas sports fields in conventional campus layouts are usually pushed to the peripheral area, disconnected from the learning spaces, the running track of the Jinlong school was positioned in the middle of the campus and lifted up on a platform to allow for other sport areas, art, library and multifunctional spaces below, thus creating a public corridor on the lower level, that runs through the whole campus.

Corridors connecting the teaching buildings on different levels to each other and also to adjacent areas of the adjoining, elevated sports fields are part of a larger scoped network, facilitating pedestrians’ free movement and circulation.

Incorporated in the dormitory at different heights and emphasized in yellow, are multiple large-scale public spaces. They are communication and meeting spaces for the dormitory’s residents and break the crowded and uniform feeling, the density evoked by the repetitiveness of the large number of residential units.

Considering Shenzhen’s subtropical climate, a lot of the school complex’s public areas remain open and were not closed off like the classrooms, labs or other special areas. Perforated, light metal panels were applied to the teaching buildings’ facades, providing not only functional benefits such as optimal air circulation but also visional qualities by revealing colors and movements behind.

A creative, human response to the limitations of public-school development

It was not the first time that Crossboundaries designed a public school, with budget and land use limitations. School designs, together with the educational philosophy are targeted to a much larger audience and have potentially far more impact on future education – which makes it such intriguing projects. With the Jinlong project, Crossboundaries responded to an imminent, realistic problem of the school shortage in Pingshan District in a most creative way, with a multitude of possible variations & modular explorations within the (at first glance) rigid project parameters.

Crossboundaries delivered with the Jinlong Prefab Primary School not only a human space for education and with substantial social impact, a hub for communication and interaction – but also a future vision on how to deal with similar projects in tomorrow’s quickly expanding mega cities.